Discover the fascinating and secretive process of audience testing of Hollywoork movies through firest-hand stories from the famous filmmakers, studio heads, and stars 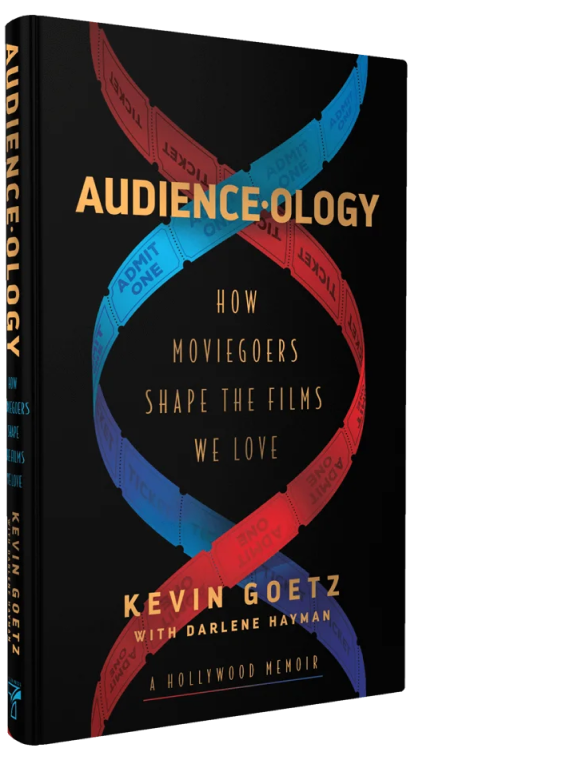 Audience•ology explore one of the most important (and most underrated) steps in th filmmaking process with enought humor, drama, and surprise to entertain those with only a spectator’s intrest in film, offering us a new look at movie history.

Available At These Fine Retailers!

Pick your preferred format below and click to purchase.

Being in the realm of America’s Cinematic books, this story depicts the chronicle of how real people have written and rewritten cinematic masterpieces by showing up, watching a rough cut of a new film, and giving their unfettered opinions so that directors and studios can salvage their blunders, or better yet, turn their movies into all-time classics.

Each chapter within this movie book informs you on an aspect of the test-screening process with added additions of behind-the-scenes stories, iIllustrating along the way how that particular aspect was carried out to best adapt to the film being created. Nicknamed “the doctor of audience•ology,” Kevin Goetz shares how he helped filmmakers and movie execs confront many mishaps while recommending ways to fix their blockbuster hits. Additionally, Goetz includess first-hand accounts from Ron Howard, Cameron Crowe, Drew Barrymore, Ed Zwick, Renny Harlin, Jason Blum, and other Hollywood luminaries who brought you such films as La La Land, Chicago, Titanic, Wedding Crashers, Jaws, and Forrest Gump.

Audience•ology explores one of the most important (and most underrated) steps in the filmmaking process with enough humor, drama, and surprise to entertain those with only a spectator’s interest in film, offering us a new look at movie history.

Audience-ology explores one of the most important (and most underrated) steps in the filmmaking process with enough humor, drama, and surprise to entertain those with only a spectator’s interest in film, offering us a new look at movie history. “Test screening a film is a terrifying experience but having Kevin in the room makes me break out in hives a lot less. The audience insight he has provided for our films has been vital, and it’s truly a sight to behold watching him work his magic. His ability to connect with and get inside the minds of an audience is unmatched.”

“The film media loves to gossip about who has “final cut” on a movie, but professionals know that what some contract says doesn’t matter much because in reality, the audience has final cut if you want a commercial hit. But getting an unbiased understanding of what the audience really thinks is not simple. Kevin Goetz is a master in aiding in this effort, as this book so entertainingly reveals.”

“When I screen my movies, they are bad. Then Kevin asks the audience why they are bad. It is painful. Like re-breaking a leg so it heals right. Then somehow, with his help, we figure out what to do. Now that I think about it, he doesn’t get paid enough. But this book should make up the difference.”

“Kevin’s analysis of my movies has been invaluable over the years. With a comedy, the number one objective is to find out, is it funny, and how do we make it funnier. Kevin is the best in the business.”

“It takes about two years for my brother Bobby and I to make a movie—from writing it, casting it, shooting it, editing it—then one day you have to show it to the world and find out whether you just wasted two years of your life. Kevin is always at that nerve-wracking first screening—front and center—and thank God he is, because he’s like a movie whisperer who somehow knows all the right questions to ask the audience, so by the end of the night we know what’s working, and we know what’s not, and, most importantly, we know how to make the movie better.”

“On almost every comedy I have worked on in the last 20 years, Kevin has taken the movie through the testing process. Watching a focus group of your movies is like being in a bathroom stall at high school and hearing kids talk about you. Having Kevin there is always reassuring because he always is championing the filmmakers. He is THE guy when it comes to audience testing.”

“Kevin and his remarkable company serve as the last validator of those assumptions. Through his carefully crafted process of audience engagement, focus groups, and data mining, he has consistently been able to help find the line between what was intended and what actually worked. This critical work has, hands-down, been the determining factor in the success of my films.”

“I remember it like it was yesterday – the day of our first preview. Bohemian Rhapsody took me nearly 10 years to make. To say I was a ball of nerves is an understatement. When the lights came on, all I remember was seeing Kevin’s heartwarming smile from ear to ear. He leaned over and said, ‘You’ve got a massive hit on your hands,’ and all my nerves disappeared. Kevin is truly the best in the business.”

“Whether you sit behind the camera or in front of it, in film school or in an office on a studio lot, or just face a screen as a movie lover, Audience-ology sheds light on how moviegoer feedback holds a special place in the final stages of filmmaking. The explanation of how the test screening process works is illustrated with fascinating stories that are the lore of Hollywood. I only wish this book had existed when I first started out in the business.”